Are you selling your house? If so read on… 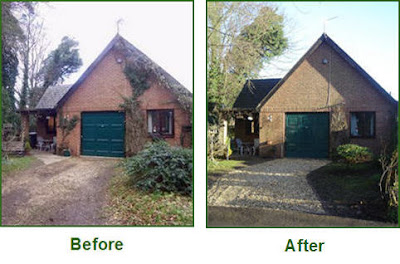 One of our really popular services is garden makeovers.

This is particularly useful for people who are selling or letting a property.

This week I was called to a property in Newbury which has been on the market for some time. Inside it was really well decorated and it is situated in a tiny cul de sac near town. Despite this, the owners had over 30 viewings and only one mental offer, well below the value.

So we agreed to come in and “do a blitz”. This involves a radical front to back clearance of weeds, cutting grass, cutting hedges and pruning trees and shrubs. In this case it also involved removing the dreaded ivy (you know my thing about this!) front and back as well as “Old Mans Beard” which had grown so thick and tangled that it had gone all around the TV Ariel as well.

We also suggested that the drive was looking very shabby and that taking off 2″ of top coating and replacing with new 20mm Berkshire shingle was needed, which the client agreed.

So we set to work and did the blitz in the first day and the drive on the second. I did think that we could do this by hand, however it soon transpired that it was too big a task. So I called our friends at A4 Hire in Hungerford who came to the rescue with a 3/4 ton digger at really short notice.

Whilst we were doing the drive, the estate agent started showing a couple of prospective buyers around, which I must admit I thought was a little odd, however they were most impressed that the owner was still doing work on the house and that the improvement from the Estate Agents literature to the new look was pretty radical.

Anyway, job done, happy customer – and best of all, one of the prospective buyers came back for a second visit later that day and made an offer just short of the asking price!

Just goes to show that spending a few hundred on getting the pro’s in to do a blitz will save or make you thousands – take a note from that woman from the House Doctor programs.

I hope I am not quite as annoying as her……Check out the piccies.